A number of restaurants, retailers and other service providers have installed kiosks in their businesses asking for reviews, and hundreds of customers are responding. 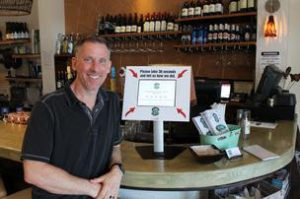 Phoenix entrepreneur Kevin Berk pivoted his online review system, ServiceGuru, so customers can let a business know how their experience was in the moment it happens.

“It’s so fast and easy and right at the time of the experience,” Berk said about the new ServiceGuru kiosks.

The kiosks offer an Apple Inc. iPad’s that ask customers questions about their service and allows customers to review specific employees with whom they interacted.

Berk started a similar review platform three years ago, but it was done online and through an app. Very few people left reviews, he said, but by bringing kiosks to storefronts, he has seen a large increase in reviews.

By getting more reviews from people right after they ate or shopped at a business, owners are given real-time feedback, allowing management to act fast to resolve negative experiences.

“I view any complaint as a gift,” Berk said, “It allows you to know what issues you can fix.”

Berk said metrics from his kiosks can be used to evaluate employees, but can also be used by employees as part of their resume to show people believe they give good service.

“This program allows the associates to see immediately how they are perceived by the customers and they are able to work on their low scores and share in their success,” Velvet Holt, the general manger the Westlake Ace Hardware in Edmond, Oklahoma, said in an email.

Berk charges $249 to install the ServiceGuru kiosk and $99 per month for a subscription to the service.